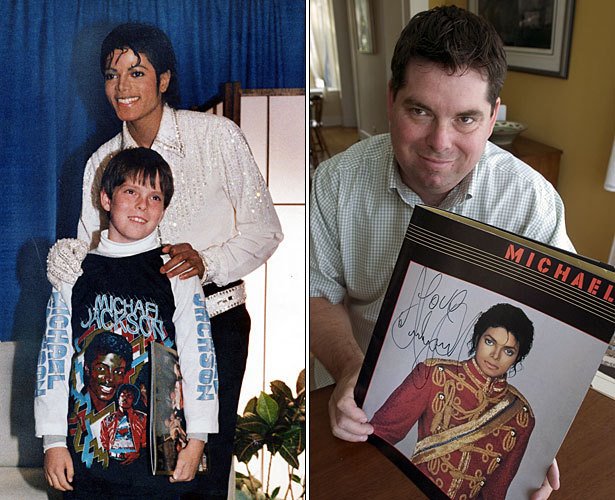 "I still remember it. It was a pretty cool event. Meeting him, you got to see a different side of him, not the Wacko Jacko stuff. He was just a really nice guy. That's what I remember about him, just being so kind and patient," said Jackson, 35, who teaches history and civics at his alma mater, Orillia District Collegiate Vocational Institute.

As a boy, Jackson was constantly teased about his name and "not being the real Michael Jackson." He was also a huge fan of the pop star, who in 1984 was in the midst of his Victory Tour and at the height of his fame.

On a chilly October night, accompanied by former Star reporter Joyce McKerrow, the Grade 5 student and his mom slipped through a side door at Exhibition Stadium and were taken to a private room.

"All of a sudden ... there was Michael Jackson. It was a special moment," Jackson recalled.

The singer, just minutes before he was poised to go on stage, offered Jackson and his mother some juice, signed an autograph and did his best to put them at their ease.

Jackson recalled that when the media came into the room to shoot pictures of the two Jacksons together, the singer "clammed up."

"But when they left, he was back to normal," Jackson said, recalling the singer as soft-spoken and a bit shy.

The singer's manager soon came in, reminded Jackson to put on his trademark sequined glove and the magic moment was over.

Jackson said he rarely speaks about the experience – even to his own wife, Rachel – because of the negative media coverage over the years that has focused on the superstar's eccentricities and allegations that he sexually assaulted young boys.

"I was driving with my wife when we found out about Michael Jackson passing away and then I told (her) the story. She never knew," Jackson said.

"That's the sad thing, that he (Jackson) does have that public image. But in my memory... for those 10 minutes, he just treated me really, really well, he made me feel comfortable, he made my mom feel comfortable. That to me is him," Jackson said.

"I've met prime ministers ... and they've never made me feel that comfortable," he said.