My Brush With Badness 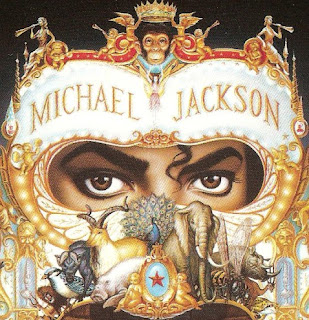 A few weeks ago, I was at a staff meeting for new employees where everyone in the room was asked to mention one interesting thing about themselves that nobody else would know. I waited patiently 'til my turn came around, and then calmly explained how Michael Jackson once sent me to J.C. Penney to buy him underwear. Since I have told my friends this story countless times, I was a little surprised by the strong reaction people had to my off-the-cuff comment. I guess I shouldn't have been. Like him or not, there is no denying that Michael Jackson is still a force of nature. Even my 5th graders are aware of him, and they were all of three years old when his last record came out! So to set the record straight, here is the account of my years with the so-called King of Pop. Back in 1989, I was a fresh-faced college grad in Los Angeles searching for my first job. Since I was one of the six people that year who actually went to college just to learn how to work in a recording studio, I had no problem landing a position at one of the major studios in Hollywood. Of course, even with an expensive college degree, you couldn't just expect to start off working with bands inside the building, because that required actual EXPERIENCE, which of course was what everyone else was out getting while I was pursuing my worthless degree. 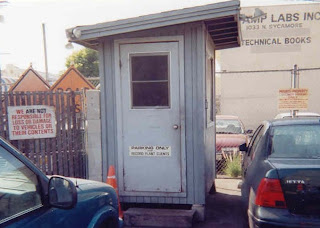 Instead, they stuck me out in the parking shack across the street for two months. Strangely enough, I had some experience in this area, as I had spent the summer working as a valet in a garage near Fenway Park. Parking cars for rock stars certainly had its moments. Iggy Pop once drove up in a Hyundai with no windshield. Either Milli or Vanilli tipped me a dollar for parking their Jeep. The Beastie Boys all sped off laughing one day in their rented Escort, and then drove straight up to Mulholland Drive and pushed it over the cliff. And once a week during lunch, David Crosby handed me a twenty-dollar bill to take his brand-new BMW 750 to the car wash, which really only set me back like three bucks. Once when I brought it back to him, he handed me another twenty for a tip. Nevertheless, a promotion was inevitable, and in the winter of '89. I was promoted to the midnight to eight janitorial position. At least I was happy to be inside the building, as it was getting cold in the unheated parking shack. But I knew absolutely nothing about cleaning toilets and mopping floors, as evidenced by the huge cloud of noxious smoke that spewed from the cleaning bucket on my first night when I mixed the bleach and ammonia together. Washing David Crosby's car for twenty bucks was one thing. But cleaning the studio bathroom after David Crosby had been in there for twenty minutes was a different deal entirely. For starters, I was supposed to stay awake all night, but after six hours of cleaning the entire building, this was easier said then done. Finally, one morning as I was leaving, the studio manager asked me to take two small brass elephant bookends home and polish them up before my next shift. I spent the day looking for another job instead, and found one right away at a studio down the street on Sunset Blvd. 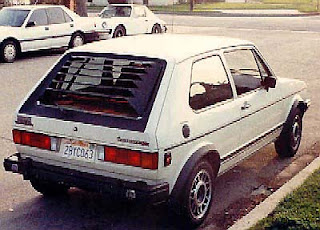 At my new job, I was hired on as a "runner," which meant I got to run errands all over LA in my trusty '84 VW Rabbit. A couple months later, they moved me out to a studio in the San Fernando Valley for a "special" project. This project would eventually become Michael Jackson's "Dangerous" album. When I first started, Michael was working with three different groups of producers all trying to take the place of Quincy Jones, who had not been chosen to work on this project. I think Michael wanted to go out on his own for this one, but the problem was that he had no idea what he wanted! One day, Slash from Guns N' Roses would be recording a searing guitar solo, while the next day, a chorus of thirty children would be singing a nursery rhyme or something. Michael didn't say much to me at first, until one day he ran in screaming that there was a "vagabond" sitting in the alley behind the studio. I took a look, expecting Charlie Chaplin to pop out or something, but there was just some homeless guy sipping malt liquor out of a bag on the back steps. Eventually, Michael warmed up to me, and even started talking to me once in a while if he was in the mood. Once, he asked if I was going to have to go fight in the (Gulf) war. I told him I was probably too old to be drafted, and he responded by saying that he was relieved, because "if you went to the war, you could die." He also started sending me out on errands, like going out with his credit card one afternoon to fill his huge Blazer up with gasoline. If I remember correctly, he had an auxiliary gas tank mounted, so he could get up to his ranch without having to get out and fill up along the way. I guess I should mention at this point that Michael is an awful driver. He hit everyone's car in the studio lot at least once, including mine. One time, he rear-ended a guy on the 101 freeway, and just left the scene because the guy got out of his car and started screaming at him. Eventually, he gave up and got someone to drive him in to work every day. Other memorable experiences include calling Tower Records (RIP) an hour before they closed, and having them shut down early so that Michael and I could go shopping. Even thought it was just up the road, I was glad to get out of MJ's car and into the safety of the store! I think he dropped about $1500 on CDs that night. Anyway, one day Michael shyly asked me if I could do him a special favor. I'm pretty sure this was after he stopped driving, so I guess he really didn't have any other way to get stuff during the day. Of course I agreed, which was when he told me flat-out that he had just run out of underwear. For pretty much the whole two years that I worked with him, Michael came in every day wearing black dress pants and a red button-down shirt. He had a whole rack of just these two items in his office, which I assume he either had cleaned and returned to him, or just threw away at the end of the day. But on this particular day, I guess he was running low on drawers. At first, he just said that he wanted underwear. When I asked him what kind, he just repeated "Underwear!" When I told him I wasn't his mother and didn't know what to get, he kind of laughed, and then said "Hanes thirty please." When I was almost out the door however, he came running up and yelled "make them thirty-twos, I don't want them to be too tight!" So there it is folks. The King of Pop wears tightie-whities! 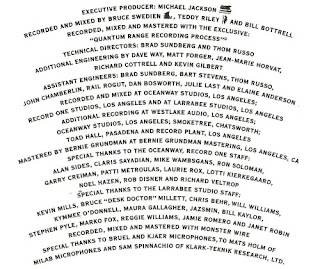 Other than that, I never saw any funny business going on for the two years I worked with him. I really enjoyed this experience, and even got my name on the CD! Michael was always polite and reserved in the studio, but he had his silly moments as well. He was also really concerned about doing anything that would inadvertently upset anybody around him. Even though he was spending five thousand bucks a day on studio time, Michael left me this note one day on my desk. I kept it as a souvenir, and pull it out now and then if people ever question my story. It pretty much tells you everything you need to know about him as a person and an artist. 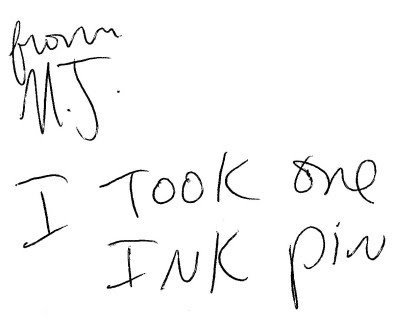