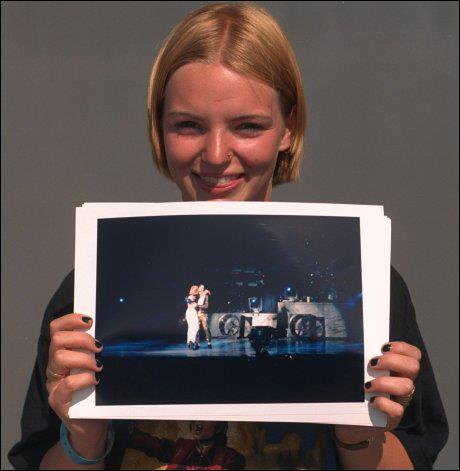 I Danced with Michael Jackson

The then 16-year-old Laila Enoksen had an experience she will never forget. She was in fact pulled up on stage and
danced with pop king in front of the 35 000 in Oslo. I screamed and cried as I hugged him. It has not yet dawned on me what really happened on the scene, but here are the pictures that show that it's me, told an excited and happy 16-year-old to VG next day.

She was selected by the security guards and carried to the stage when Jackson performed "You are not alone." But the incredible experience was not quite it. It was at the end of the song when in fact Michael Jackson got down on his knees next to Laila.

The girl from the region had been a fan since she was a child and had spent all the savings on what must have been an experience of a lifetime. As children we burst into tears when we heard or saw [Michael] Jackson. Therefore, we have used all our time to save money and our vacation, she told VG."

When she married in late May, she entertained her guests at the special show.
- I danced for the song "Smooth Criminal". I met my husband, Ole Magnus, while I danced for Michael. Therefore it was appropriate to do it again, this time in my own wedding. It shows that Michael will always be with me.
Source [Edited and Translated from Article]: www.vg.no/musikk/michael-jackson/artikkel.php?artid=559797

SHE was the girl in the white pants and shirt picked from the audience to dance with Michael Jackson.

He was the porter who carried Jackson's bags to his hotel room at the Sheraton on the Park.

When asked, the now-married couple say they met "through a mutual friend".

Little did Loretta Tolnay, then single and 23, know that her future husband, Eduardo Bolton, was sitting in the audience at the SCG in 1996 watching her dance with Michael Jackson.

But Mr Bolton knew exactly who she was when she visited the Sheraton a year later, asking to have a "sneak peek" at the presidential suite where Jackson married nurse Debbie Rowe.

"He said to me 'your that girl in the white who got up on stage and danced with Michael Jackson'," Mrs Bolton recalled yesterday.

They married six years later and danced the bridal waltz to Jackson's ballad I Can't Help It.

When their son Miguel was born they didn't name him Michael only because he would have had the name of another famous singer - Michael Bolton.