The day I met Michael Jackson 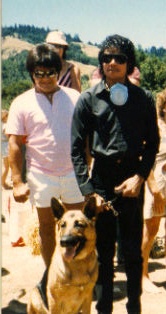 I have been lucky enough to have had the opportunity to meet many Great American Superstars in my life, but this is the story about THE DAY I MET MICHAEL JACKSON

The day I met Michael Jackson was such a Thrill for me... It was at one of Luasfilms Annual Picnics, in the late 80's, which took place every year around the 4th of July, out at Skywalker Ranch in Marin County.

It was during the time Michael Jackson was working with George Lucas on his Captain EO 3D project. My sister was working for Lucasfilm at the time and invited me to the party.

It was also around the same time I had been hired by Lucasfilm to be their Tiger-Woman Double for The Morf to Morphing sceen in the film Willow. Which can be seen on The Special Edition DVD of Willow.

Soon after arriving at the picnic at Skywalker Ranch I spotted Michael Jackson and went over to say hello. He was talking to George Lucas and a handful of kids were surrounding him so I didn't get the chance to say hello up close and personal until later that day. However I was able to take some great photos of Michael in those first few moments.

Michael was wearing his trademark shades, black slacks, black shirt and black hat, along with a blue surgical mask over his mouth. And when I pulled out my camera and held it up to take some photos of Michael, he kindly took off his hat, and surgical mask and smiled for the camera. His smile was brighter then The Sun and could have lit up the entire galaxy that day. He had a presence that was truly magical.

Later that day I ran into Michael under a covered shaded area where he was sitting at a picnic table all alone, well with his bodyguard and a big German Shepherd Dog standing close by, so I approached slowly and asked his bodyguard if I could say hello to Michael and get an autograph, his bodyguard said "ask Michael yourself" so I did and I slipped right into the seat next to him and said HI! very shyly, and he said "HI!" back just as shy and his voice was as soft and sweet as you would imagine Marilyn Monroe's being.

I told Michael that I loved his music and said that his lyrics really move me and touch me. Michael replied by saying, "Thank You that really means a lot to me, really it does! Thank You!" I felt like I was floating on air in that moment and knew that his words were genuine and that he really appreciated his fans and I could tell that he truly loved being a performer and making a difference in peoples lives.

I also asked if he would mind signing The Lucasfilm yearbook I had and he graciously agreed to do so, as did George Lucas earlier that day.

A little later I was walking down the dirt road to my car, and a fire truck they had on the property was driving down the road in the same direction, and it was ringing it's bells and tooting it's horn, so I thought they wanted me to move off the road to give them more room to pass, but even after I moved over into a ditch they were still ringing their bells and tootin their horn, so I looked back again and to my surprise, I saw Michael Jackson hanging out of the passenger side
window of the fire truck and he was waving and ringing the bell like an exited 5 year old kid would be.

It seemed as though he was starring at me, but I couldn't image that, so I looked over my shoulder to see who he was waving at and no-one was there, it was just the parking lot filled with cars behind me, so when I looked back at him, he was still waving, and it suddenly dawned on me that he was trying to get my attention all along and waving at me.

In that very moment I saw his true child-like spirit shining thru and it felt so pure and innocent. It was a really special moment for me and I will always cherish those moments with Michael. I feel very lucky to have met him that day. He had a beautiful spirit, a precious soul, and an angelic smile, and I am so grateful to have witnessed his playful side.

Michael Jackson was Magical On Stage and Off and was Gone Too Soon!