Little Michael as a Babysitter

"Michael Jackson, a sweet gentle twelve-year-old boy, was my son’s babysitter before he became the Michael Jackson Moonwalker. This memory came back vividly last night as news of his death was telecast all over the world. 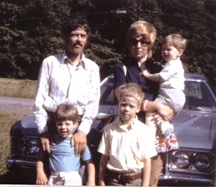 This was in the summer of 1972 and my son’s ranged from ages 3 to 8. We were spending our last trip together as a family at the Playboy Club in Miami, which I thought was a crazy place to go with 3 young children. My husband had announced he wanted a divorce because he was feeling crushed by the weight of a family of four, mortgage payments, a job he hated. It was hard to concentrate on the boys because I was weepy and shaky for most of that visit. My boys were fascinated by the Playboy bunnies with their fluffy tails. We were using the elevator going from our room to the pool or the dining room, I was surprised to see a young black boy acting as the elevator operator. In a very grown up way he asked each passenger “What floor please”? I was curious why he chose this seemingly boring task and I asked him why, smiling shyly he replied ”Something to do I guess”. He was the only other child besides mine that I saw at the club. “Why are you staying here?” I asked. “My brothers and I are performing here,” he answered. On one of our elevator trips he asked shyly.”Would you like me to take the boys to the kiddy pool?” I would be happy to.” So for the next two days Michel Jackson watched my kids at the kiddy pool while my husband and I sat at the edge of the adult pool ending our marriage. When I glanced at Michael with the boys he showed infinite patience with a sometimes squabbling six and eight year old and countless times pickiing up my three year old who was always falling down in the water. Michael was trying to show them how to swim although I was not sure that he himself knew how. I do remember him laughing and having a wonderful time, a child playing with other younger children, away from the limelight. Knowing his background that time must have been one of the few Michael had as a child that he was able to enjoy the company of other children without the spot light trained on his every move. We left at the end of two days. One of my sons is now a professor and an award winning author, one a career military officer and the then three year old now owns a bar in Saigon and operates two web sites. They have only foggy memories of those 2 days. The marriage ended I went on to a twenty-five year career in television news and as a talk show host and producer for both ABC and CBS affiliates in Orlando. I interviewed more than eight hundred people in my career but one of the most moving glimpses into the life of a celebrity was a sweet lonely twelve year old who spoke in a voice barely louder than a whisper, but someone who clearly loved being with children and for a few hours was himself a child." Svea