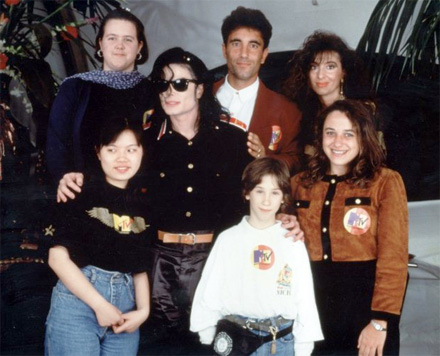 It was back in March 1992, yet I remember it like it was yesterday. They were premiering his new clip then, ‘Remember The Time’, here in Australia, like they would have been all over the world and with the premiere and the promotion of his upcoming ‘Dangerous’ tour there was also a competition, where the winner and their partner would be flown to America to have dinner with Michael. The anticipation for this video was huge and I remember watching the video clip in awe, over and over again, amazed at how just when you think you have seen all there is to see from Michael he brings out something even more brilliant then before.

The next night, while still at the dinner table with my family, and while writing out the last of my entries for the competition of a life time, a competition that nothing could stop me from entering, I remember turning to my somewhat skeptical family to say the least and saying; “Just you all wait and see, I am going to win this!” The funny thing is that I did win and I didn’t even know it.

The following Monday I called work not feeling well and to advise that I wouldn’t be in. My supervisor did mumble something about Michael, but as I was not feeling well, I didn’t take much notice and hung up. Within a couple of minutes I had a call back from work from one of the other girls hysterical on the phone shouting, “Paula you won! Paula you won!” It took about two more calls from work and another two from MTV before I actually believed it. I swear that when I hung up from that last call the whole neighborhood must have heard me scream. They had drawn the Australian winner the previous Saturday, but we were at a wedding and didn’t even see it. I mean you don’t really think that you are going to win. Anyway, about a week or two later my husband and I were on our way to America to have dinner with Michael.

We were greeted at the airport by a Starlite Limo and driven to the La Belage hotel in Hollywood where we caught up with our MTV representatives and the other winners. There were thirty winners all together and their partners. They held a party for us to all meet that night and the next morning we were driven by bus to the Marriott Palm Desert hotel in Palm Springs where we had time to get ready before they came and picked us up to take us to the dinner to meet Michael that night.

We were driven to a secret location where they had been filming Michael’s ‘In The Closet’ during the day. The feeling was surreal when they took us to take photos on the actual set, before Michael arrived. I look at the photos even now, then look at the film clip with Michael and Naomi and it is still hard to believe that we are actually standing on the same set.

A big Marquee had been set up for the dinner with a real tropical carnival theme going on. There was lots of entertainment organized for us that night, from animals, like an elephant, a cheetah, a camel, a llama, a chimpanzee, as well as a puma who you felt was going to rise up and change into Michael at any moment, like it does in ‘Black or White,’ to a magician, people on stilts, fire eaters, and Rio dancers. The atmosphere was amazing and Michael had spared no expense. The place had been set up like a restaurant with small round dinner tables. We had been seated right up the front and next to our table was an empty reserved one. Much to our delight we were told that this was Michael’s table.

By this time we were overwhelmed by excitement as at any minute Michael was going to walk through the door and come and sit right next to us. We could barely contain ourselves and the agony of the wait was killing us. I remember us going outside and waiting to see Michael arrive by helicopter, but we were soon told we had to go back inside and sit down before he would come out of the helicopter and walk in. We did go back inside and finally Michael walked in. It was like the Earth just stood still. The media had been cruel, even back then, by claiming Michael was strange and weird, but let me tell you, I saw nothing strange or weird. I saw this beautiful, well dressed man walk through the door that was polite, well spoken, and gracious like he always is, and I will never forget that smile, that mesmerizing smile of his that just took your breath away. He truly looked amazing! The only thing strange I remember is how everything he walked past just seemed to light up and of how you just couldn’t take your eyes of him.

Michael greeted people as he walked past and then came and sat down. I remember going over to him with my husband, giving him a hug and a koala (not real of course), that he placed on his lap and started patting. The picture at that moment was priceless. We thanked him for the dinner and asked him whether he was coming to Australia soon and he replied “yes” and said that he would be touring. He was referring to the upcoming ‘Dangerous’ tour. (The Australian tour was later cancelled and we had to wait till the ‘History’ tour to see Michael again.) I had gone over in my head all the things that I was going to say to him and here I was up close and the words just wouldn’t come out. He literally left me speechless.

I remember Michael getting up and dancing the Conga. He and Naomi were both pulled up by one of the Rio Dancers and everyone else joined in a line behind. Here we were dancing the Conga with Michael…Not something you do everyday. I also remember how they called us and Michael over for our photo shoot together and of how my husband who was positioned directly behind him for the photos, placed both his hands on Michael’s shoulders and kept them there, even after being told to take them off by the photographer and of how Michael just turned his head around and gave this adorable smile. I also remember Michael turning around once the photos had finished and shaking our hands and bowing his head to us as we bowed to him. Here is this huge superstar, the world’s biggest Entertainer ever, that still has this humble nature about him. The only thing that night that I don’t seem to remember, even though it was a dinner, was eating any food. I know that there was plenty of food there, all personally prepared by Michael’s chef, and I remember Michael taking the first mouth full to start the dinner, but I don’t remember eating a single thing. Believe me that with Michael being so close to me, food was the last thing on my mind that night.

We weren’t allowed to take any photos of Michael ourselves, and had been told that if we did, Michael would probably just get up and leave and no one wanted that. I guess this way he could relax a little more and enjoy the night without it feeling like a media attack with cameras constantly in his face. We were however sent a few photos and a short video of Michael with us by MTV. I frequently look at the photos and play the video to remind myself that it did really happen, that it wasn’t just a dream.

Michael may have been taken away from us physically but he is embedded so deep in both mine and my husband’s heart that no one can ever take him away from there without taking our hearts out as well.