The King of Pop sings SAKURA at Restaurant Nippon

“Michael loved sushi” says Mr. Nobuyoshi Kuraoka, the owner of the Restaurant Nippon.      According to him, Michael Jackson ordered sushi almost everyday during his New York recording session in 1995.     Mr. Kuraoka vividly recalls the first time he received a take out order from the King of Pop himself calling from his van in transit.  “I’ll be there in 7 minutes and would like to order Toro, Salmon and Tuna rolls, please.”  Mr. Kuraoka had to request him to allow his staff at least 15 minutes for the next time.  From the next day on, just as requested, Michael called exactly 15 minutes prior to his van’s arrival at the restaurant.   He always waved from inside of the van while his assistant came out to pick up the order.      One day, Michael and his staff had a luncheon in a private room at the restaurant.  When Mr. Kuraoka and his wife Eiko went to greet him after the meal, Michael impressed them by singing “Sakura, Sakura” (one of the most well-known children’s songs about cherry blossoms) in Japanese.    Michael told Mr. Kuraoka that he learned many Japanese children’s songs while he toured in Japan.  Mr. Kuraoka asked Michael why he picked “Sakura Sakura” among many.  He answered “It’s very mysterious, you know?” then he smiled at Mr. Kuraoka.  The smile reminded Mr. Kuraoka of a mysterious short story titled ‘Sakura no ki no shita niha (Under a Cherry Trees) by Motojiro Kajii. During his short writing period in 1920s and early 30s until tuberculosis took his life at age 31 in 1932, Kajii left masterpieces of poetic short stories.  “ Dead bodies are buried under the cherry trees! You have to believe it. Otherwise, you couldn’t possibly explain the beauty of the cherry blossoms. I was restless, lately, because I couldn’t believe in this beauty. But I have now finally understood: dead bodies are buried under the cherry trees! You have to believe it. "  The heavenly beauty of cherry blossoms has been a profound mystery to many who are enchanted by them.  Nobody knows whether Michael knew the story, but Michaels’s ability to sense the mystery in Sakura shocked Mr. Kuraoka. Mrs. Kuraoka still remembers the day Michael’s sang ‘Sakura Sakura’. She felt that his clear voice was a refection of his pure soul.          Michael Jackson’s sudden departure resembles the abrupt ending of the cherry blossom season.   Just as the mystery of Sakura fascinates many, his sudden death mysteriously thrills  his fans.
Shukan New York Seikatsu  July 4th, 2009
https://www.restaurantnippon.com/nippon/mj.pdf 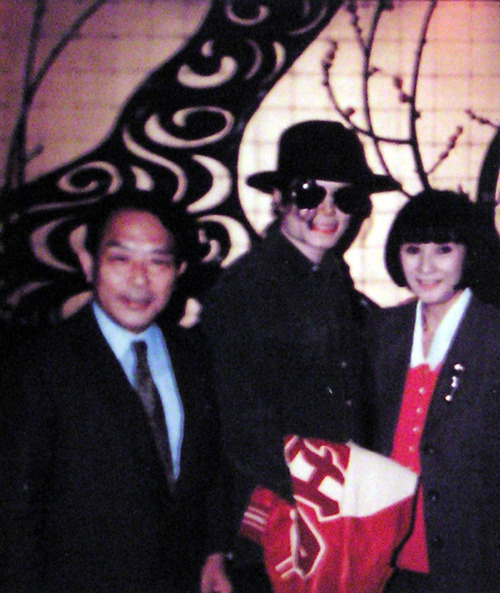 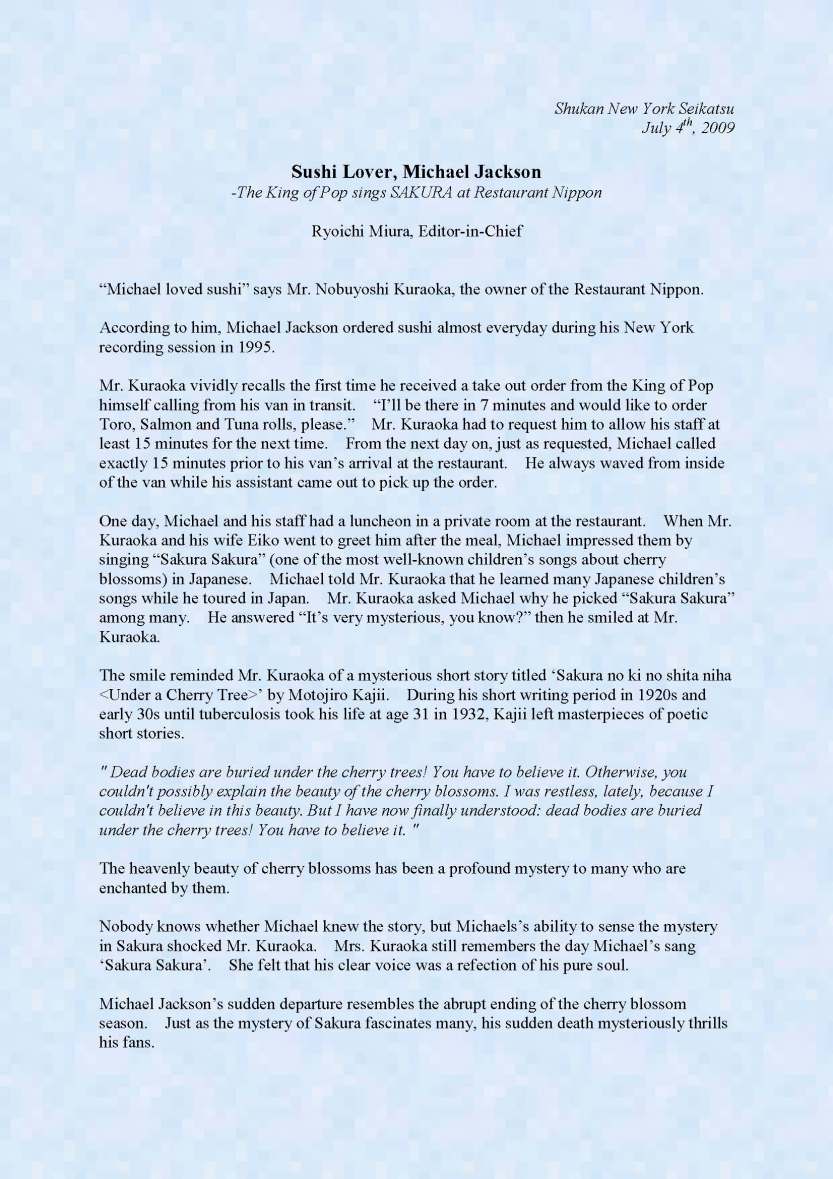