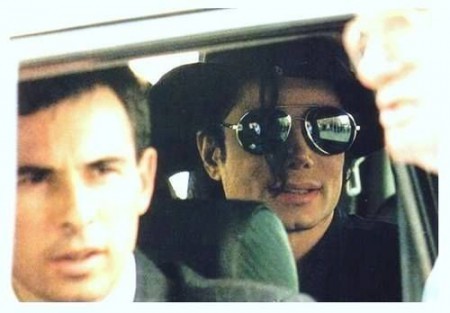 One day (Gokor) was driving Michael to an important meeting, Mike as usual was lookin' out of the window examining people outside,so suddenly the red light went for the cars and they stopped,so did Gokor. There was a little girl with her mum on the pavement,she was playing with her ball while her mum was busy with talkin' on phone,so the ball fell on the motorway and the green light for the cars turned on,a car was nearly to run the baby down, Mike was following all that, suddenly he ran out of the car to save the baby. Gokor couldn't manage to get what was goin' on, at that moment a car was to run M.J. down and he was nearly to die. thanks God Gokor managed to get him back and the baby's mum pulled her away from the car, when Michael got into the car he and Gokor were trembling, Mike was bitterly crying of the thought that the car could run the baby down, at that moment Michael didn't care for his own life, he was ready to save the girl and die himself.

The driver also told us that Michael used to disguise and take a taxi (those taxes in London which carry several passengers) with Gokor and M. Culkin and go to an ice-cream shop, wait in a huge turn, so that nobody guessed that Michael Jackson was near them. So one day when they were waiting in a turn, Mike asked Gokor to tell the old lady who was near them that he (Gokor) would pay for her. The lady turned Gokor down for several times very rudely, then Gokor turned to Michael and said loudly: "You see MICHAEL JACKSON she doesn't want to". After it everyone turned to them, the old lady couldn't believe it, she came down to her knees, was trembling and crying. Michael helped her to stand up, held her, kissed and bought the ice-cream for her. He did such kind and touching things for several times, this makes me respect ,adore and fall in love with him even more, he's a priceless pearl.

fter leaving a concert when Michael and his team got in the limousine, a huge army of fans was following the limousine as usual, so one of the fans wanted to have a glimpse of Mike so desperately, that she was almost run down by Gokor's limousine, she was a bit injured, so when Mike learned what was going on, he became very furious at the securities and Gokor, he was nearly to fire the whole stuff,he invited the fan to the limousine and spent the whole day with her, they were travelling in the limo around the city and Mike was telling her about his life and career.

He also said that when they were in London and a hot woman would pass by them Michael would use some Armenian words to talk about the woman with Gokor so that if his children were near him they couldn’t understand what they were talking about. He would say “lavna che Gokor,” which in English means “isn’t she hot Gokor” or he would call those hot women “pretty fish.” They spoke about the fact that Michael had a woman he loved very much and had been near him for many years. It wasn’t a secret but her identity was kept a secret.