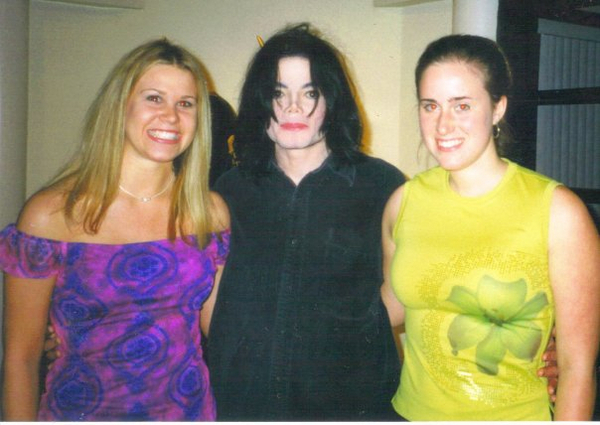 "It's very nice to meet you too," Michael Jackson said to me in his very soft, high voice, as I had the amazing experience of meeting him, unexpectedly, in Orlando, Florida in 2002 when, by chance, we were eating at the same restaurant.

I was competing at the Miss America Jr. Teen pageant and on the last night my family and I ate at a very popular Japanese steakhouse, the Benihana (which Michael told me was one of his favorites).

My family got out of our seats when we heard a lot of commotion at a nearby table. When our cook told us that Michael Jackson was eating in the next room, we couldn't believe it. We left our chairs and our food to see if it was true. It was.

Michael was so gracious and generous, at times even shy. The owners closed the restaurant to additional customers and Michael took pictures and talked with people for over two hours. Everyone was standing in line to meet him. He was very patient and sweet despite the numerous people and downright chaos. I particularly remember people outside the restaurant's locked glass doors banging and shouting to get in to see him.

I saw poised beauty queens turn outright giddy in a matter of seconds of just seeing him. Everyone around him was talking loudly and screaming, not only for his attention, but because they were impressed. I felt a natural high and an excitement that rivaled Christmas and birthdays. Energy and excitement radiates from Michael! As he walked outside to a waiting car, hundreds of fans were gathered. As his car drove off, I saw two women pass out.

His kids, wearing spiderman masks, were with him along with an entourage of about 10 people. Michael talked with everyone and it took him hours to slowly walk out of the restaurant to the limo outside. He signed autographs and gave hugs. He was very relaxed and seemed genuinely happy.

I actually wasn't a huge Jackson fan, besides knowing him and appreciating his music, until I met him (my junior year in high school) and since then I defended him during the next years. When I met him he was nothing like those reports you see on T.V. The literal pandemonium that surrounded him was unreal. It really put into perspective the good and bad of his amazing star power. And yet he still remained calm, composed and childlike.

It's been really tragic to hear of his passing. He is such a huge international star. I've been living in China for almost two years, and I've found that Chinese people universally know two people- Michael Jordan and Michael Jackson. Sometimes showing the picture of me and him, especially in China where it is hard for me to communicate, has been a great conversation starter.

I feel incredibly honored to have met him. There's just something about him and being in his presence that is hard to explain- it's simply...special.