One Day at Liseberg 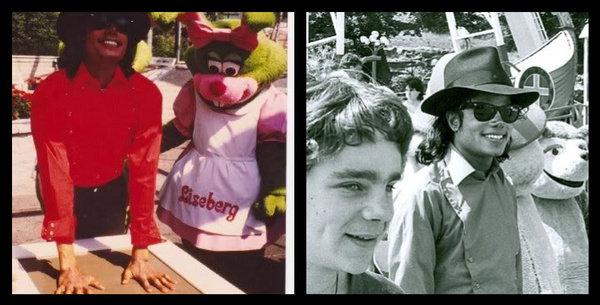 In 1988, Michael Jackson contacted the then 14-year old star of "My life as a dog" Anton Glanzelius. He remembers the day they spent together at Liseberg, the largest amusement park in Scandinavia. The park was closed to the general public for the sake of Jackson and his friends' privacy.

Anton Glanzelius met Michael Jackson for the first time when he was 13. Jackson had seen the movie "My life as a dog", directed by Lasse Hallström and with Glanzelius as the leading star, and had enjoyed it so much he invited the boy to his home Neverland. Michael had seen the movie twice, the second time with his mother. The movie was very special to him but Jackson' never revealed why or what the movie meant to him, to Anton. As a 13 year old growing up in Southern Gothenburg, he had no idea who Michael Jackson was. "I ran to the neighbors' house and asked them if they had any records with Michael Jackson. I wanted to see what he looked like." Anton arrived in Neverland along with his mother. They spent a couple of hours in Jackson's company but they did not get to know each other that well that time. Anton remembers that Jackson was very polite. Glanzelius explains that he was probably too young to realize the greatness of his friendship with the popstar. "As a child, you have a different perspective," he says. Anton Glanzelius describes his friend as "very kind-hearted and humble". On stage he was an artist who influenced the world. In private, he was very shy. "He was a very ordinary guy who lived an extreme life from early on." When Jackson came to Gothenburg in 1989, he contacted Glanzelius. "It was such an amazing and fun experience as a 14-year old to have the entire Liseberg to ourselves." Glanzelius remembers that they rode the rollercoaster "Loopen", Michael's favourite ride in the park, a dozen times. "He was laughing constantly, we had so much fun." The marketing director of Liseberg, Pelle Johansson, had been working the first half of -89 to bring Jackson to the amusement park. Jackson was going to hold a concert at Erikberg, Gothenburg, and the owners of Liseberg saw their chance to put the amusement park on the map. They made hundreds of phonecalls and sent letters to Jackson and his managers, but it was still uncertain whether he was going to show up. "We didn't think it would actually work. The huge media coverage made it hard for him to even leave the hotel and get here," Johansson says. Jackson arrived with his friend Glanzelius and a company of approximately 100 people. "We closed the park and they were able to move as they pleased in the park without any photographers or journalists. The only thing we asked in return was his handprint."The roofs were filled with photographers trying to get a picture of the smiling Jackson. The visit lasted 3-4 hours. Jackson and Glanzelius also rode the bumper cars, which he really enjoyed, Glanzelius tells Göteborgsposten. "He was fooling around and laughing and we were chasing each other trying to get a hit. He was such a sweet, humble, warm and lovely person."

(Glanzelius now works as a TV-producer and is no longer acting.)