Homepage > True stories > Once Upon A Time

Once Upon A Time 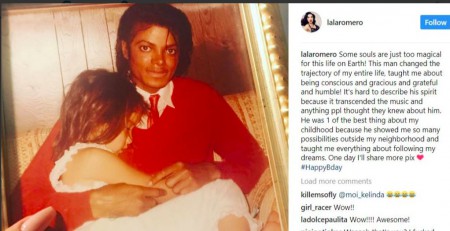 I don't tell this story too often, in fact growing up I kinda learned to just keep it to myself. Whenever people would find out I knew him, a gang of silly, dumb questions would follow, and I would always end up having to defend someone I loved so much.

When I was 5, my cousin Brian and I where OBSESSED with Micheal Jackson. We had dolls, sleeping bags, lunch boxes, and OF COURSE the gloves. I was pretty convinced I was going to be him when I grew up, and nobody could tell me otherwise! Brian was older then me, and found out at school MJ actually lived in the Valley, we lived in.

Anyone from LA pretty much knew the house. So we wrote him letters and enclosed a bunch of pics, you remember the ones from school you'd write on the bk, yeah well, lucky Michael got about 25 of me!! Basically we told him we LOVED him & I told him I was a singer and dancer!!! We also asked him to come to our house & visit!! Our loca tia Carol (RIP) took us to his house and we rang the gaurd gate. His guard came out to us & took our letters. WE WERE SOOOOOOO HAPPY, we KNEW he would get em!! I honestly can say we were just happy enough to see his gate & meet his gaurd NEVER did we really expect what happened next. 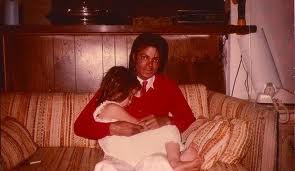 About 4 days later, at 10:30 pm, my mom got the call from Carol, Michael Jackson was HERE, in our APT building, on her couch. I was 5 & anybody who knows a 5 year old also knows that it's damn near impossible to wake em up!! The pic you see of us is him holding me, cause I wouldn't wake up, he insisted my parents take the pic so I would truly know he came!! A few days later I was going into the hospital for surgery & he called me. I couldn't BELIEVE I was talking to Micheal Jackson & that he actually had my number!! Over the next few years he would invite Brian & I to his house, to watch him shot his videos & to his shows. It's weird, when I was lil, I didn't really grasp FAME, especially his FAME. All I knew was he was my friend & I think that's why he liked me. My friendship with him changed my life. It was a HUGE influence, it made me believe having a singer career was in arms reach. My neighborhood didn't support BIG DREAMS but his freindship gave me confidence & assurance that ANYTHING & EVERYTHING is possible, if you work hard & aren't scared to try. His generosity & kindness inspires me daily. Here was the biggest super star in the world taking time out to come to a broken down apt building in Van Nuys CA to see his fans. He was ALWAYS about his fans & his community, and I really always knew that if I got my chance I would strive to be just like that!! Even as a tiny lil girl I could see his saddness & his lonely. It was a part of him, I think his childhood, fame & money alienated him from most of the world. Thats why he loved US cause we didnt care about the BS!! We just had fun!! He was so goofy & silly, we would jump on his trampoline and raid his candy shop.

Michael was like Edward Scissorhands & Willy Wonka to me, SOOOOO AMAZING in the HEART but so misunderstood by most! I love him always for touching my life & showing me a different world then the one I grew up in. I hope those babies of his really grow up understanding that they did have the best daddy in the world. His heart & sprirt are what made him the GREATEST and so RARE.

One day I'll post more pics, and tell ya specific stories!! All the good things ya heard about him were ALL TRUE!! I promise!! R.I.P M.J. YOU WILL BE MISSED AND ALWAYS LOVED! 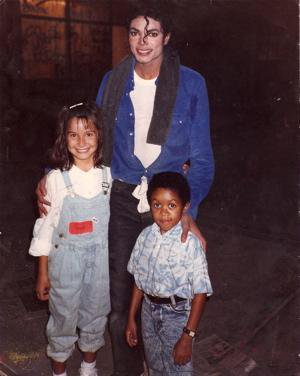 "Michael called me, after a surgery I had & invited me to the set of his video for "The Way You Make Me Feel". Here's what stood out about the day, the biggest super-star in the world made me feel like the super-star. In the middle of all his hectic-ness he would come see me, take pics with me & make sure I was good between takes!!

At 5 yrs old I sat & watched him shoot, take after take in this warehouse in San Pedro CA. He introduced me to everyone, his sister Latoya was there, his co-star, that beautiful girl he was SO shy to kiss Tatianna. Even at that young age I was very aware of how gracious & kind he was with EVERYONE on set. Looking back now I remember he was sooooo excited that all of the extras were real ex bloods, crips, gang members from LA. I remember him being so excited about giving them ... a chance to shine & a new opportunity. We sat in his trailer, I remember telling him I wanted to be a singer when I grew up & gave him pics of me from my dance recital. I remember eating with him & him being the very first vegetarian I had ever met! I was like u don't eat meat??? I was so confused!! Lol. Man writing this, thinking about this day & all the rest of the times I spent with him makes me smile!! As a lil girl I never really grasped how famous he was, honestly I think that's why he loved hanging out with me! To me & all the other kids, he was just a fun, crazy, silly guy, who sang our most favorite songs. I love him for being the most honest, pure heart I have ever known for showing me video shoots, recording studios, & concerts, up close and personal, making my dream seem possible. I was there in it, seeing it happen, he brought me into a world I would have never known existed without him. A lil girl from Van Nuys CA. I can't even begin to count the ways he changed my life. He helped create my dream. Records like Homegirlz & Sadgirl I know he would be proud of, he was always ALWAYS about giving back!! I miss him everyday & can't believe he is gone."