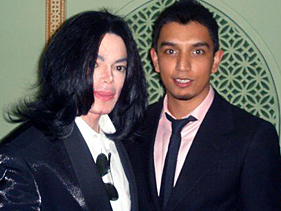 The MTV News correspondent recalls his 2006 encounter with the King of Pop in Bahrain.

The first album I ever borrowed (stole!) from my dad was Michael Jackson's Off the Wall. It was a cassette tape with that great picture of a young Michael Jackson dressed in a black tux, with big hair and an even bigger smile, leaning up against the brick wall.

In 1988, my first concert was when Michael Jackson at London's Wembley Stadium during his Bad tour. It was immense. He was in his prime and a spectacular performer in every sense of the word.

But the first time I actually met Michael Jackson was in 2006. I was invited to Bahrain to take part in one of the preliminary car races for the Formula One Grand Prix. Our gracious host was Crown Prince Sheikh Salman bin Hamad bin Isa Al-Khalifa, who was also playing host to another member of royalty, King of Pop Michael Jackson.

Towards the end of an amazing week of some R&R (racing and relaxing), I was invited along with John Legend, Tyson Beckford, DJ Whoo Kid, Simon Webbe and a few others to dinner at his palace. (Whoo Kid gave us his account of the dinner back in 2006.)

Like kids visiting Disneyland, Whoo Kid and I were the first to get off the trucks when we arrived. A line of people, starting with the crown prince and his wife, was assembled to welcome us. It was then that I turned to Whoo Kid and whispered, "Yo, that guy looks a lot like Michael Jackson, no?" You see, we had no idea MJ was going to be there, my initial reaction was to think it was someone that looked like him and not actually him.

He had shoulder-length black hair and was wearing a shiny black tuxedo with aviators tucked into his open white shirt. He knew how to dress. As I walked up to Michael, he extended his hand and said, "Hi, Tim." That was weird, but I guessed he had been briefed prior to our arrival. Then I figured I'd try to break the ice, so I said, "Hi ... and you are?" The prince and everyone within earshot looked at me with disbelief, but the King of Pop simply replied "Michael" with no sense of ego whatsoever. I smiled, "I know," and we laughed. To the relief of everyone listening, Michael had a sense of humor.

Before dinner, everyone sat down in the living room and made conversation with each other. Michael didn't say anything at first. He just sat back and played the observer, listening to the conversation, laughing at times and paying close attention at others.

Later, Michael, who had not initially planned to stay for dinner, casually announced that he'd be sticking around. He did — for four hours.

Instead of moving to a grand dining room, the prince had decided to eat dinner in the living room and keep it on a casual vibe. The palace staff appeared and laid tables down and brought out an incredible buffet spread. MTV was actually playing on the TV, and my old MTV News show (which aired around Europe and the Middle East) came on during dinner. I slunk back in embarrassment as everyone's attention, including MJ's, turned to the TV.

A few things surprised me about the legend in real life: His voice was quiet but not as high-pitched as you might have heard him in interviews. Maybe that was part of his character. He wasn't wearing his signature aviators, but I remember seeing him sweep his hair in front of his face a few times, almost as if to hide his eyes. He was shorter than I thought he would be, but despite being skinny, he was solid and well-built (yes, we bro-hugged).

Dinner conversation was as diverse as the characters sitting around the tables. The topic of his big comeback came up early, and Whoo Kid started telling him he should "get hip-hop with it" — cut the hair short, go for a new look and get some bling. Ha. When I told Whoo Kid to show him his big, diamond-encrusted watch, MJ joked, "What is that?" We couldn't stop laughing.

The jokes didn't stop there. I remember Tyson Beckford standing up and challenging Michael to a dance-off. Michael hit back with, "Let's see what you got." Tyson gave it his best with an MJ impression and a moonwalk. Michael laughed, "That's OK, but that's easy. Can you do the backwards and sideways moonwalk?"

Right in front of us all, he effortlessly broke out a few dance moves (and totally wiped the floor with Tyson). There was a rapturous applause all round. MJ took a small bow. Tyson sat on the floor in submission. It struck me that Jackson was at his most comfortable when performing; and for an obviously shy man, there was a part of him that loved the attention.

It was getting late when Jackson said his goodbyes. He said he was going to spend some time with his kids, who were staying next door, and then read a little.

The Michael Jackson I met was someone who liked to laugh and joke, but he also seemed happy to forget that he was one of the most famous people in the world and appreciated normality in his life. But that wasn't just a normal dinner for me; it's something I'll be telling my kids about one day.