In 1987, Michael Jackson meets 4-year old wounded Angela Darlington and her mother, Helen, in Melbourne Children’s Hospital. The mother has this to say on the visit 21 years later:

“My daughter, Angela, was in hospital with head injuries after being hit by a car. One day we were told by the nurses that Michael Jackson was coming to visit. We had to keep it a secret, so the hospital wasn’t overwhelmed with fans. There was a big flurry, as his assistants handed out T-shirts and signed copies of his Bad album to everyone on the ward. Then he just walked around and talked to the patients. […] I said hello. He said he was pleased to meet me. I was gobsmacked. He was very gentle and seemed shy. I got the sense he had a deep love for children, especially those who’d been hurt. Then he crouched down and said ‘Hello, Angela’. She couldn’t talk, because she’d just come out of a coma, but she started smiling. After that day, she started to get better. I think of him as an inspiration. We’d been having a terrible time – Angela was in hospital and I’d been ringing Lifeline to keep myself together, but he was a total inspiration for the whole ward. I thought: ‘Thank God for sending him’. He just had a presence about him – this great empathy with people who needed to get better. Now, Angela is 25, at university and full of life. There was another boy on the ward who was about 15 and was a huge fan. After Michael’s visit, he started getting better too. His mom thought it was a miracle. I believe many of the children got better after meeting him. I think people should know about this side of Michael. I’ve never believed he was anything but a good person.”

On November 18, 1987 Michael Jackson visits the Sydney Children’s Hospital in Randwick, Australia. Natasha Lang, mother of a child committed in the hospital at the time, offers her account of his visit there years later:

“I will never forget that day as long as I live, when Michael came to the hospital with an abundance of stuffed animal toys, so generously given, to all the children in the children’s ward. He went around the ward and visited each child personally and quietly spoke words of comfort to them and I will never forget the delight of these children, the medical staff and the parents who visited on that day.

My son now is a grown man and I wish to share this photograph with the whole world because it shows Michael’s selfless and generous nature. My son, unfortunately, lost his eye in a school accident that week and, as you can imagine, it was a real tragedy for the whole family, but that day he gave us all some joy, great pleasure and an abundance of happiness.

Michael, I know that you are with the angels and may God Bless your soul and, rest assured, you will live in our hearts forever.  Thank you for the music.” 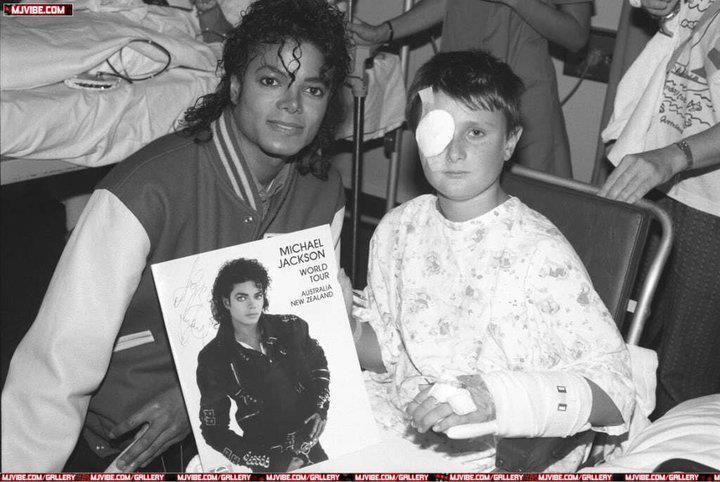