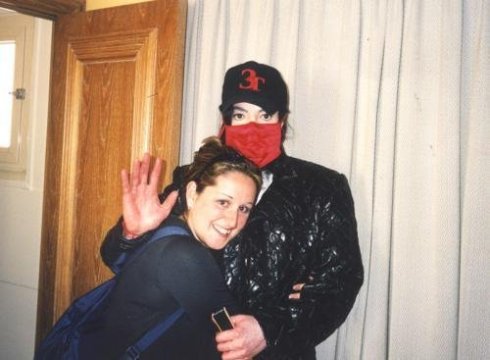 There is an exact reason why I decided to write this post: very often I receive mails and messages about my meeting with Michael Jackson. People, especially the fans, want to know how he was, what his voice sounded like, was he tall, was he shy, was he weird? I get asked tens of questions. I understand the curiosity and though it’s not easy to recollect every moment of that incredible day, I always try my best and offer a detailed report of it.

At that time I was 23 years old, I had been a Michael Jackson admirer for 12 years already and had been spending my last 7 years founding and running MJ fan clubs. This led me to establish excellent relations with Michael’s staff. At that time, I was very close to then MJJ Productions Vice-President Bob Jones.
One year earlier, in 1999 I had been granted a visit inside the MJJ Productions headquarters on Sunset Boulevard in Los Angeles. This is another incredible adventure I will tell you about in another post. Yes, I had the chance to touch with my own hands the Thriller Grammys and more.

Back to my meeting with the King, it was late 1999 when I came to know Michael was planning to attend the 2000 World Music Awards in Monte-Carlo and receive the Artist of the Millennium Award. At that time I was the president of Child’s Heart, a fan club that was officially recognised by Michael and MJJ Productions and used to publish a full colour, glossy magazine distributed all over the Italian newstands. I was living in Rome then and Child’s Heart was based in Rome, so we planned to gather the fans and travel to Monte-Carlo to see Michael. Bob Jones was going to join him in his trip to Europe, so I knew there was a high possibility I was going to meet Michael.

Bob Jones was at that time MJJ Productions’ Vice President.

My predictions turned out pretty much accurate.

The show was planned to be held on May 10th 2000 at the Sporting Club, but we arrived on the 8th so that we could get a glimpse of Michael. He arrived that same day, causing hysteria among the hundreds of fans waiting outside the Hotel de Paris. The next day, I had the chance to meet Bob Jones who had arrived in Monte-Carlo, too. He hugged me and told me to meet him in thirty minutes at the the entrance of the Hotel de Paris. I had with me a beautiful charcoal painting of Michael and his son Prince as a gift. I was waiting outside the hotel when Bob came and took me inside to meet Michael’s then-bodyguard Nagin. He introduced me and two friends who were with me as “dear friends from Rome.” “Treat them well and take them to Michael”, were his words, still echoing in my mind.
Next thing I knew I was in the elevator with Nagin and my friends: destination Michael’s suite. 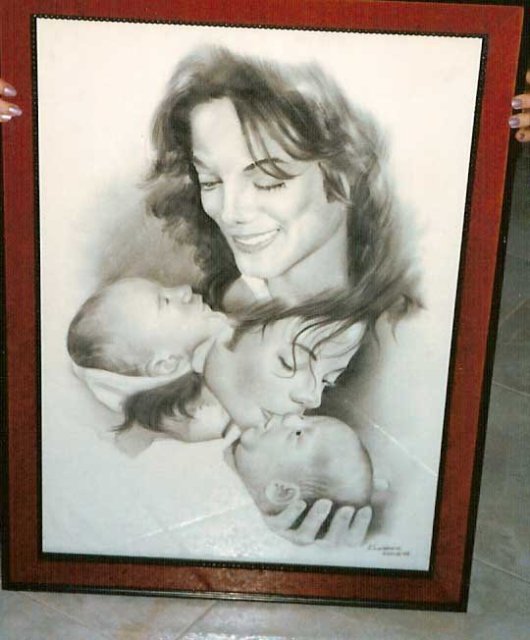 The carchoal painting she gave to Michael

Once at the top floor, we were told to wait in the corridor. After some longer-than-usual minutes, we saw the door at the end of the corridor opening. Three japanese fans came out of it and we could see Michael was there, waiting for us at the door. We were told we could walk towards him, now. When we approached the door, he slightly took a bow and welcomed us in the room. First thing I noticed was his kindness and you could sense his humility. Second thing I noticed was his perfume, very strong. For those who always ask, he was dressed in blank pants, black boots, white t-shirt, black jacket, red mask and a 3T baseball cap. He was taller than I expected, very handsome. In the first minutes he looked pretty much shy, we told him we were simply happy to meet him and that we thought he was in excellent shape and that we couldn’t wait to see him on stage. Of all the things I remember of that encounter, the one that I cherish most is the fact that I had the chance to watch him in his eyes in person. He had incredible eyes; don’t know whether it is because of his childhood, his past, his unusual life or his artistic soul, but Michael Jackson’s eyes had nothing in common with human eyes. They were shiny, deep and strong, like dark stones with a melting core. It’s difficult even to find the words to describe them.

After chatting for some minutes (he asked where we were coming from), I handed him our gift, the painting of him with his son Prince. He was incredibly touched, he started staring at it and looking closely, asking us who had done it, and thanking us like a hundred times. After that, he looked less and less shy, more relaxed. His voice was normal, deep, not high pitched at all. I then gave him the Child’s Heart magazines I had with me: he started checking them and at a certain point I found myself shoulder to shoulder with Michael, turning the pages of the magazine, with him telling me which one he liked most (it happened to be, of course, the issue where I wrote a comparative report between him and Charlie Chaplin). After the magazines, it was time for the photos.

I asked him if we could take some pictures together, he smiled and said “yes of course”. I went first, determined to hug him, which I did. I held him strong in my arms, I actually could feel he was slim but not fragile, on the contrary, he was quite toned. After taking the photo, I asked him for a kiss on the cheek, he hugged me and said “yes”. At that point I shifted the red mask he was wearing and while still hugging him I kissed him right under the ear on the jaw. I could see he was wearing the mask because he had little make up on and was unshaved, so he probably needed to cover the blotches on the skin.
After my two friends took their own photos with him, sadly it was time to say goodbye, but first we had some magazines and photos autographed. We shook hands again, he thanked us, we thanked him, but it was time to leave. Outside there were our friends waiting for us, the media who knew we had just met Michael Jackson wanted to interview us but we declined.

It was undoubtedly one of the most incredible days in my life, having the chance to meet and talk to one of the most special beings that ever walked on this planet. A being who has changed the life of millions of people and, of course, mine. Thank you, Michael.