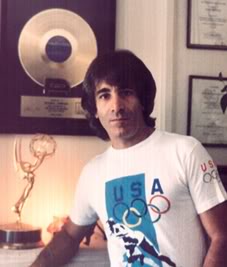 DAYTON, Ohio – Motown Records is known for its unique sound in music history. Artists and groups, including Marvin Gaye, Stevie Wonder, The Temptations and The Supremes helped create, what is called "The Motown Sound." However, it was Motown recording engineer Russ Terrana who helped generate those final mixes that became No. 1 hits by such artists and groups – 89 No. 1 hits to be exact. A few of those hits involved the Jackson 5 and Michael Jackson as a solo artist.

Detroit native, Terrana said his life goals always involved music. When he was 10 years old, Terrana, along with his brother Ralph Terrana and friends created a band known as The Glo-Worms. (The group evolved into The Sunliners, and later reformed as Rare Earth). "After leaving Rare Earth, I went to Motown to get a job as an engineer," he said. "They wanted to hire me, but I was under contract at the time." Russ said Motown proceeded to buy the company out, which allowed him to join Motown's musical family as their newest recording engineer.

Throughout his years as a Motown employee, Russ said his work excited him, but said he always considered it to be a normal job. However, though he can't relive his memories, Russ said he will always cherish them. According to him, one of those memories regards the first time he worked on a Jackson5 album. "I was still in Detroit at the time when Berry[Gordy] called me back in 1970," he said. "Berry called and told me [that] he didn't like the final mixes of their ABC album and wanted me to redo the mixes on the entire album. Motown shipped me the master multi-track tapes and I did the mixing in Detroit."
daughter, who, according to Russ, appeared to be eight or nine years old. He said the young girl looked around the studio and spotted Michael behind the glass. "The young girl started screaming Michael's name repeatedly. She screamed, ‘Momma, it's Michael.' I looked at Michael and saw him waving at the little girl. He looked at me and was embarrassed. Jokingly, I said to him, ‘Yeah, I guess you are pretty popular out there, Michael.'"

Besides working directly with the Jackson 5 and other artists, Russ said a lot of his memories involved mixing. He said "Dancing Machine" – a huge hit song for the Jackson 5 – reminds him of a memory that still makes him laugh. According to him, Gordy didn't like the mix of the song "Dancing Machine." "It was early evening and Berry just stopped by the studio," he said. "Berry said, ‘I don't like it. It's too gimmicky. But, there's nothing we can do about it.' The album went out with the single on it, and then, the [disc jockeys] started playing the song, and it was a huge Motown hit."
Special thanks to Chris Cadman and Craig Halstead for background information on album release dates, taken from their book Michael Jackson: For The Record. Michael Jackson fans can visit Cadman's Web site at www.the-michael-jackson-archives.com.

Behind the article: Russ Terrana was a Motown Records song engineer who has mixed a total of 89 No.1 hits, and what he said keeps his mixing interest going is his life-long passion for music. Though our focus was on his memories of Michael Jackson, it was an honor to speak with him.

In regards to Michael, Russ emphasized his love for him and said Michael reminded him of a famous director today. "A person he [Michael] reminds me of is Ron Howard," he said. "Ron started out at Opie on the 'Andy Griffith Show,' and now he's a huge movie director. That's how Michael is. You can't get a better education than living through the actual situations."

He also complimented Michael on his talent of knowing how to express meaning in his music. "When it comes to music, don't sing the words - sing the meanings to the songs," Russ said. "That's what producers tell singers, and that's what Michael was a genius at doing. He knew how to get to the messages."

Before our conversation ended, Russ expressed his feelings for Michael and said he wanted people to understand the following: "Michael Jackson was a good person. He was a very honest, likeable person, and I loved him just for the person he was."