"On June 3, 1990, word had reached the newsrooms that Michael Jackson had a heart attack and had been rushed to Saint John's Hospital in Santa Monica. Jermaine immediately called Marlon to see if he had heard anything Marlon never called back, so Jermaine and I went to the hospital to learn what we could about Michael's condition.
When we arrived at Saint John's, we learned that Michacl had gotten chest pains and passed out while he was practicing some dance routines at the Hideout. When he woke up, he called his friend and plastic surgeon, Dr. Steven Hoefflin, who rushed to his side. After detecting an irregular heartbeat, Hoeflin drove Michael immediately to Saint John's.
(...)
Although Michael looked to me as if he was feeling fine the doctors told him he needed to stay overnight for observation.
(...)

Only after it was determined that he was suffering from costo chondritis, a harmless inflammation of the ribs, was Michael allowed to leave." 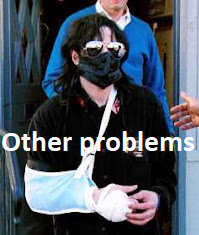