Michael Jackson has been not guilty of any wrongdoing, he´s always been innocent. There are clear and demonstrable facts. As well as other famous people, MJ was sued many times during his lifetime, mainly because of counterfeiting songs or fathering children, nothing of that was true.

"Michael told me he had an average of 1,500 lawsuits going on all the time. Ppl constantly were making all sorts of false claims. Fake paternity, ppl claiming he stole their music etc. Most just wanted to meet him. A hairdresser even tried to sue me for stealing him as a client." 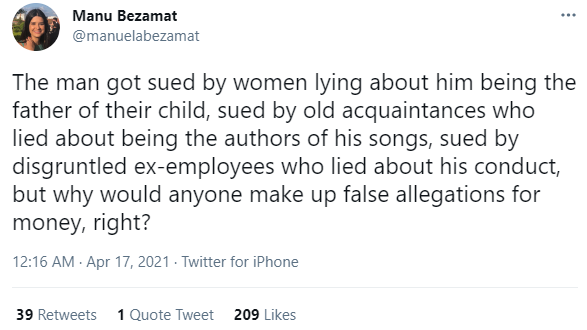 During the molestation accusations and trial, MJ was portrayed by the media to be guilty from the beginning. This directly conflicts with the strong American value of “innocent until proven guilty.” The question remains, why some media still tries to ignore all wide evidence of his innocence, and some 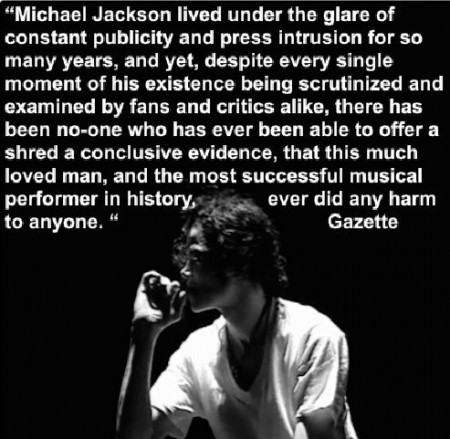 An Appeal to Reason by The Gutter Monkey: youtu.be/VpR-QboDfyg

- All the accusations turned out to be lies, created solely to obtain a high sum of money.
- They were always initiated by adults, not by children.
- The 2003 raid on MJ´s Neverland home, that turned everything there upside down, did not find anything for what he could be punished.
- Two Grand Juries decided not to indict Michael Jackson.
- The five-months long court proceedings in 2005 found him not guilty on all counts.
- There are phone recordings and quotes proving how he was being extorted.
- There are 366 pages released by the FBI after a 10-year investigation into Michael Jackson CLEARING him of any wrongdoing. Two-thirds of those pages show Michael Jackson as the victim of "extortion" and "threats. FBI - vault: vault.fbi.gov/Michael%20Jackson
- Michael Jackson was a heterosexual, always interested only in women.
- Michael Jackson was a very generous man.
- Michael Jackson was unable to hurt anyone because he was a very sensitive person with a kind heart, pure soul with high moral values, and also with a high level of compassion and sense of justice.

Don´t forget that the false allegations are common, the number of victims of lies is rising exponentially and that experience leaves them emotionally scarred for a very long time if not forever. Michael Jackson was the victim and suffered serious damage in many aspects and he has never overcome some of them.Falselyaccusedofrapeorserioussexualassault-thenumberofvictimsofliesisrisingexponentially.Thisfilmtellsthestoriesofjustasmallsampleofthishorrificreality.WeBelieveYou-FalserapeaccusationsareNOTrareWeBelieveYou-FalserapeaccusationsareNOTrare

The Truth About The Allegations:

What happened to the truth?

Public: "He must be guilty"

Public: "We need to believe them anyway"

Not guilty or innocent:

WHAT IS SO TRAGIC ABOUT MICHAEL JACKSON?
-That he was abused as a child and then called a child abuser
-That he felt deep pain in childhood, then was accused of causing pain to other children
-That he worked so hard to help children, yet the ones who hurt him in the end were children (due to their parents)
-That he said he would jump off a balcony if there were no children left on earth, because as far as Michael was concerned; only children could be trusted, as he viewed them all as innocent. He truly cared about them and felt a deep connection, but again it was children who destroyed him (due to their parents)
-That the children he opened his arms and heart to, are some of the ones that are now accusing him of child abuse.
-That he never had any kind of normal childhood, and for people who don’t know much about psychology, they don’t understand this can stunt a child’s emotional development. Michael was still a child emotionally and was deeply connected to his inner child, whether he was aware of this or not.
-That people are trying to obtain money from his estate when he’s dead. If these people were really abused, they wouldn’t care about money, they’d care about justice. Unfortunately he is dead, so that could never happen.
-That those liars in my opinion are destroying his life time of work, as many do believe them.
-That he was basically used all his life. From being controlled by his Father, to being used by those he tried to help or even by those that knew him, friends, family and staff
-That he still can’t rest in peace, and it’s coming up to ten years, since he passed
When you are abused as a child you want justice, not money. You also don’t suddenly realize you were abused as a child years later. A child that is abused will not want to be around the abuser. They will do anything they can to avoid visiting the abuser. They will show signs of deep distress and will protest. MANY signs will be picked up by teachers in particular. Some children can’t escape easily, as unfortunately their abusers are family members. All the males that made claims against Michael, never needed to be around him, it was a choice.
A child that is being sexually abused, does not want to play videos games, board games, or have any interaction with their abuser. Children can have repressed memories, due to terror and fear they felt as a child, or that they simply couldn’t process what was happening to them, so they dissociate. As they grow they will ALWAYS know they were abused, it’s just they can’t recall the events in exact detail, rather as fragmented memories. They also find it hard to piece together events and emotions in combination. Example; as an adult, they may recall a specific event, but they cannot recall how the event made them feel, or where it took place.
The two recent men who came forward, don’t display any signs of child abuse to me. It’s very rare for a child abuse survivor to recall events in as much detail as they stated, and not just the details, but their emotions attached to the events.
Amelia Rose Rivers, former Clinical Psychologist (2003-2014)

"All the allegations made against Michael Jackson are based off of the first accuser's story, Jordan Chandler, and if that one is false, which I do believe it is false, all the rest crumble."

Forget the Facts–We Want the Story!

How media put Michael Jackson on trial in 1993

A GREAT piece on what the Chandlers did to Michael Jackson. One of the very few that actually saw through the tabloid media's smears and saw that this was indeed a witch hunt.

All facts, deep research and analysis of the cases are here (a must read!):

Luka Neskovic...How the Media Shattered the Man in the Mirror:

Thomas A. Mesereau Jr., who was lead trial counsel in the trial of Michael Jackson in 2005, speaks about his experience:

“The Michael Jackson trial was unique. More accredited media covered these proceedings than the O.J. Simpson and Scott Peterson trials combined. When the verdicts were reached, people in every capital around the world were riveted to their radios, computers and televisions. The "King of Pop" was more popular than anyone, including Elvis Presley. 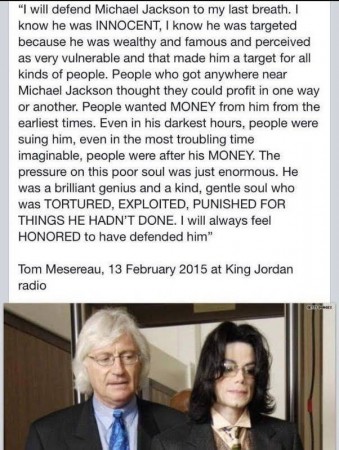 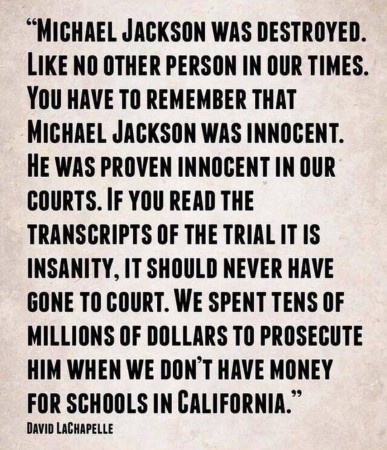 You see how utterly ridiculous it is to judge someone based on a movie which excluded all evidence that contradicts the narrative it wants the viewers to believe which presents no proof and which is cleverly dramatized and edited. This movie is FICTION.

It´s not a documentary but a work of fiction: thevioletreality.com/leavingneverland-isnt-a-documentary-it-s-a-work-of-fiction-a6ba55e1a01b 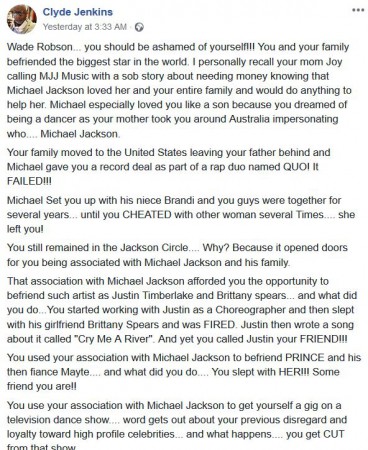 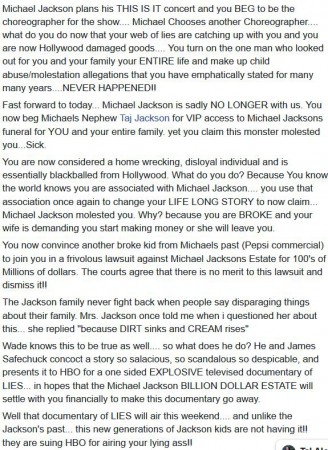 Before all of this, almost no-one knew them. Now they're being interviewed by Oprah. "My story of abuse and its results will make me relatable/relevant" said W*** R***** in notes found by MJ estate and presented at his 2016 deposition.#LeavingNeverland

And she couldn’t care less for Robson & Safechuck. She didn’t care despite facts ..that they were lying extortionists. All she cared to do was bring down the most famous person on the planet..Michael Jackson

Covering #MichaelJackson molestation trial in 2005 I recall effective testimony from #WadeRobson that Jackson had Never molested him. After Jackson's death, Robson tried to get job w Jackson estate projects. They didn't hire him. Now-in #LeavingNeverland-Robson claims he molested

How & Why Safechuck’s Civil Case Was Dismissed: youtu.be/Z4AvL2Ev6g8

Imagine being accused of a crime you didn't commit, but when you told the truth no one believed you. Instead, you were convicted, deprived of your freedom & taken away from your loved ones. In most cases it's because of someone else's lies or misconduct. Happens far too often!

Michael Jackson Conspiracy by Aphrodite Jones
The FBI Found Nothing (Black/White version) by D Francis and Daniel Francis
Victor Gutierrez Puppeteering the Lies (PDF)
Article: Neverland Kid Told Me in 2005 “Nothing Happened” to Him or to Wade Robson

“If you really understood Michael, he was the most innocent, loving, compassionate human being that you could imagine. He was too gentle for this world. The trial really traumatized him, and hurt him and made him even more frail than he was.” 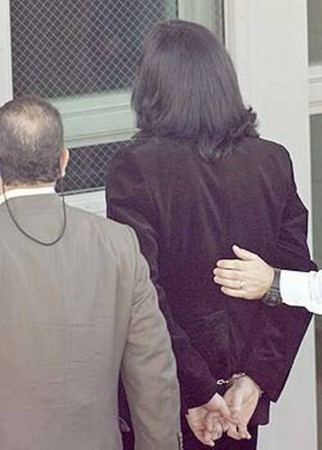 <<<<ஜ۩۞۩ஜ>>>>
(...)
In our darkest hour In my deepest despair Will you still care? Will you be there? In my trials And my tribulations Through our doubts And frustrations In my violence In my turbulence Through my fear And my confessions In my anguish and my pain Through my joy and my sorrow In the promise of another tomorrow I'll never let you part For you're always in my heart

"I do understand ppl not being able to grasp the idea that Michael was innocent, because they can not conceive of THEMSELVES being that pure of heart. But to make these statements (that he was guilty) now is just NOT appropriate. (or ever...). Educating these ppl is the best avenue."

PROTECT AND PRESERVE THE “LEGACY” OF THE DECEASED. THOSE LEFT BEHIND CAN BE HURT.