“Michael Jackson’s image was as much a work of art as the man himself. Through his music, dance, and fashion, he created a mystique that was unique to him and recognized as such throughout the world. Michael’s appeal was in his desire to send subtle messages through the manipulation of his voice, body and clothes. Costume and performance came together to become Michael Jackson. We likened Michael Jackson to a canvas. He wanted his clothes, like his music and dance moves, to be mind-boggling self-expression… a very real man with a deep love and appreciation for art, someone who very much embodied the dreams he inspired in others.”
"When he was singing and recording in the studio we'd leave him alone, but when the album was finished, all that creative energy would go into the music videos, the live shows and the performance, and then Michael would be very involved in what he wore, starting by sketching out his vision."
"His costumes had to perform onstage as well as he did. They had to be like his second skin – wearable art accentuating both his style of dancing and the beat of the music."
"Who doesn't love a man in a uniform? It was about that creating the sexual mystique. But Michael made it his own by pushing the envelope, rebelling against the establishment the uniform is supposed to represent with all those badges and making it rock & roll."
"Michael would come out of European museums inspired to wear the antique costumes that were up on exhibit. So he did."
"Michael was a man of many paradoxes, most of which we were able to represent in the clothes we designed: Rigid military cuts that were also elastic and moveable; rebellious regalia, fit for army commanders, worn over the heart of a gentle man; bedazzled embellishments adorning a man blessed with a quiet humility; one of a kind, handcrafted clothes worn with aged, scuffed Florsheim shoes."
Michael Lee Bush, King of Style: Dressing Michael Jackson

"MICHAEL WAS A VISIONARY IN EVERY SENSE OF THE WORD. HE WOULD LOOK AT IMAGES AND TELL US WHAT HE LIKED AND THEN HE WOULD TALK TO US ABOUT WHAT HIS MUSIC AND DANCE MEANT. FROM THERE WE WOULD TAKE THAT VISION AND DESIGN AROUND IT SO HE HAD THE COSTUMES HE NEEDED TO PERFORM AND MOVE IN BUT ALSO ONES THAT HELPED CREATE THAT VISION ON STAGE.!
Michael Lee Bush (source: https://www.mjworld.net/news/2012/09/20/michael-bush-interview/)
"Why do only baseball players get to wear shin guards? I'm going to wear them."
"Everyone wears two gloves, I'll wear one and make them pay attention."
"My clothes should be as entertaining up on a hanger as they are on me."
Michael Jackson, according to his longtime costume designer Michael Lee Bush
“Gloves were just to enhance the movement. I thought one was cooler than two. The eye goes to where the white is. And your feet, if you are dancing, you can put an exclamation point in your movement, if you have a point of light on it. So, I wore white socks ”
Michael Jackson

“…But I never stopped wearing them. Ever. My brothers would call me a dip, but I didn’t care. My brother Jermaine would get upset and call my mother, “Mother, Michael’s wearing his white socks again. Can’t you do something? Talk to him.” He would complain bitterly. They’d all tell me I was a goofball. But I still wore my white socks, and now it’s cool again. Those white socks must have caught on just to spite Jermaine. I get tickled when I think about it.”
Michael Jackson 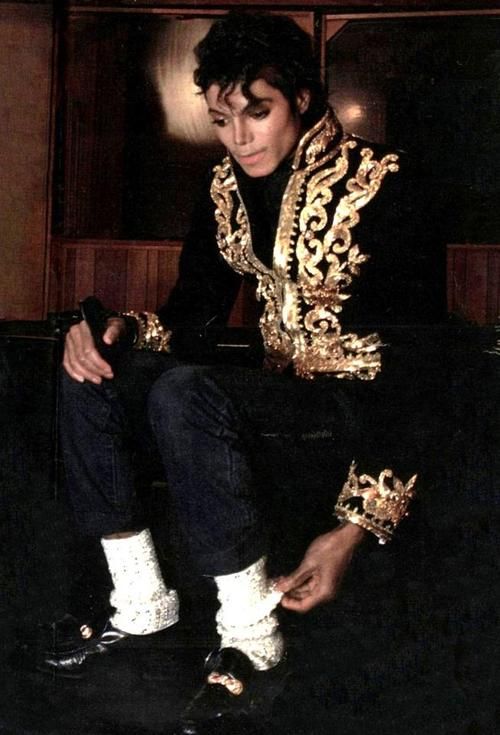 “He picked up the idea to cover his mouth with a mask from the people in Asia, where it is commonly used as a germ guard. Then Michael thought, Why would I wear just a plain one? Michael Jackson didn’t just wear a surgical mask; he had to transform it into a fashion accessory. We bought a surgical mask and cut the pattern from it to make Michael’s silk masks in black and solid jewel tones. After a while I think Michael felt safe behind the mask, so its function evolved to become more of a protective shield."
Michael Lee Bush

Question: Why are you wearing a silk mask in your latest appearances? Michael: Because…uh..with time my skin condition has gotten worse. I hate to say it. I have vitiligo and uh, I am totally completely allergic to the sun. I’m not even suppose to be outside actually, even if I am in the shade the sunrays can destroy my skin.

“Michael was usually a 28-inch waist,but by the midpoint of the show,when he was ready to perform his magic act of choice,right before ‘Beat It,’ he’d already lost five pounds of water,and his waist dropped to 27 and a quarter.If we didn’t have clothes hanging on the rack in the right order that were getting progressively smaller,we’d risk him putting on a pair of pants that would fall to his ankles with each rhythmic move of his body. And there is no magic in that!”

"I don't wear much jewelry-usually none-because it gets in my way. Occasionally people give me gifts of jewelry and I treasure them for the sentiment , but usually I just put them away somewhere. Some of it has been stolen. Jackie Gleason gave me a beautiful ring. He took it off his finger and gave it to me. It was stolen and I miss it, but it doesn't really bother me because the gesture meant more than anything else, and that can't be taken from me. The ring was just a material thing." 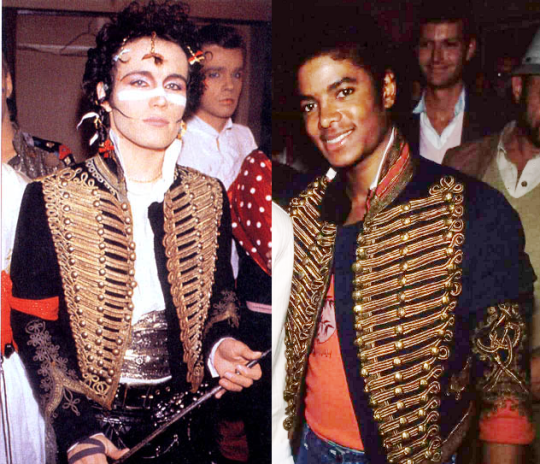 The ringing of a telephone cut sharply through my sleep. I fumbled for the receiver. 'Hello?' A soft, highpitched voice echoed down the line to me. 'Hello,' it repeated. 'Is that Adam Ant?' The voice had an American accent and sounded vaguely familiar, but my fuzzy brain reacted angrily. 'Terry,' I said, thinking it was one of the Ants' drummers playing a prank. 'Stop p****** about. It's 4am and I'm trying to sleep.' 'No, it's not Terry,' said the voice. 'It's Michael. Is that Adam Ant?' 'Very funny, Terry, now f*** off.' I slammed the phone down, rolled over and tried to get back to sleep. The phone went again. 'Hello,' I barked into the receiver. 'Hi, no, really, it is me, Michael Jackson,' said the funny voice, 'and I just want to ask you...' 'Terry, if you don't stop this I'm going to come over there and f****** thump you.' Bang. Again the phone went down. Again I rolled over. Again the phone rang. I grabbed the receiver and shouted: 'Terry! That's IT!' 'Er, hi, is that Adam Ant?' This time the voice was deep, sonorous, American and calm. It didn't sound anything like Terry. 'Oh, oh,' I stammered. 'Yes, this is Adam. Who are you?' 'I'm Quincy Jones, calling from LA. Sorry, we probably woke you, but I'm here with Michael Jackson and he'd like to speak with you. Is that OK?' A pause, and then that same soft voice. 'Hi, Adam, it's Michael. Sorry if we woke you.' 'Oh, no, sorry to have been so rude,' I apologised. He said he had just seen the video for our song Kings Of The Wild Frontier. 'It's great,' he said. 'How did you get the tom-tom sound?' 'Oh, thanks. Well, we use two drum kits and then add loads of other percussion on top...' 'That's great, Adam,' Michael interrupted. 'I really like your jacket.´ 'Huh? My jacket?' I tried to think. 'Berman's and Nathan's in London's Covent Garden. They supply costumes for movies.' 'Wow. That's great,' he replied. 'How do you spell that? Bowman's and who?' 'No, B-E-R-M-A-N-apostrophe-S and N-A-T-H-A-N-apostrophe-S.' 'Great, thanks. Let's meet up next time you're in America, huh? Bye.' The line went dead.

Michael Jackson marching with soldiers from all around the world:

They Don't Care About Us - This Is It

"It makes me very sad that Michael Bush has decided to auction off MJ's iconic clothing. Both MLB and I know that it was MJ's wish to create a museum for these pieces. MJ spoke about this often to us. That is why MJ trusted MLB to hold on to these items."

A little bit about make-up

Question: ok, I was watching the macking of Black or White last night and I loved the makeup look you did on him. Can you tell us which brands you used on him like foundation, eye shadow palette, lips. We wanna know it all! Noticed you even did eyeliner on the eye Lid. He looked amazing Karen Faye: I made my own foundation, this palette of eyeshadow(make up forever),light tech (RCMA) cream blush, Lancome dual finish, black soft grease pencil for eyeliner and a Lancome lip color that is no longer available, matte tango. 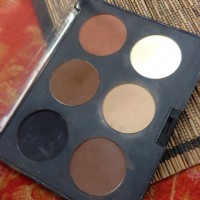