Homepage > Thoughts and ideas > On nature and animals > Bubbles and Muscles

Bubbles and Muscles and other pets

Michael Jackson and Bubbles Animal Planet documentary - it has some inaccuracies, but still ok: 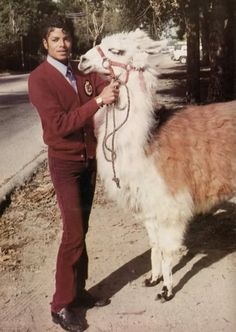 One day, Michael decided he wanted a llama. He asked me to take him to nearby Agora and we ended up at this lot packed with hay and horse trailers. From the car, we eyed four llamas out back. I parked between two trailers, unintentionally shielding my Mercedes from view. It was the only parking spot available. When we walked into the office – two kids dressed casual but smart in T shirt and jeans – this guy, bent across a counter doing some paperwork, didn’t even look up when he said, “We’re not hiring.” “We ain’t looking for no job,” said Michael, wearing his shades. “We’re here to buy a llama.” The man looked up. Not a flicker of recognition on his face. It took me about two seconds to know that his musical taste ventured nowhere near the Thriller album. “We don’t have any llamas,” he said. The look on his face said it all: you can’t afford it. “You have four of them out back,” I said, trying to keep calm. “You know how much they cost?” Michael smiled. “We know how much they cost.” Then came an incredible bombardment of questions, fired by the man’s prejudices and assumptions. “Can you afford a llama? What do you boys do to afford a llama? Where will you keep it? Have you ever thought about this?” Ever patient, Michael explained that we had a house with grounds and were serious customers. “I know how to look after all kinds of animals,” he added. The man begrudgingly asked to see some ID. Michael handed over a bank card. I handed over my driving license. And then night became day. “You’re those Jackson boys?” said the man, his face lighting up. He began to back-pedal about how he had to be careful and he couldn’t sell to just anyone; you understand how it is. Bu we didn’t understand: we saw right through him. “So you’re happy to accept me because now you know who I am?” Michael asked. The biggest misconception people had about my brother was that his legendary shyness made him timid, but he was a man of principle, especially where his roots as a proud black man were concerned and he wasn’t afraid to speak up on this when riled. Michael took back his ID and came right out with it: “You are an ass, and we don’t want to spend our money in here any more.” Then we walked out to the Mercedes the man had failed to spot when we arrived. On the drive home, Michael was exasperated. “Can you believe that? What is this area about? What are they teaching their kids?” We had always been told by our parents that no one is born with a prejudice. It is something that is taught, ignorance passed down from generation to generation. The more Michael brooded, the more fired up he became. He told me to drive to Tito’s. That afternoon, Tito’s acoustic guitar and our free styling lyrics captured an angry inspiration for a song we called “What’s Your Life?” That was how Michael liked to work. When a true experience inspired a song, he liked to get it down on his tape recorder or in the nearest studio. We recorded that song within an hour at Tito’s studio, also in Encino.

Jermaine Jackson in his book “You Are Not Alone”

The whereabouts of some of the King of Pop's exotic menagerie are known, while others seem to have vanished. Source: www.wideopenpets.com/whatever-happened-michael-jacksons-animals-neverland/

Celebrities are known for their shenanigans, which does not exclude purchasing dangerous exotic pets. Michael Jackson took things a bit far with his own private zoo, personal pets that included tigers and snakes and the occasional chimp, oh my!

Jackson housed the animals at his Neverland property. After his 2005 child abuse sex scandal, the musical artist never showed up at the private zoo again. But the pets still had to be cared for. Allegedly, the King of Pop gave his approval for the final whereabouts of all of his pets, arrangements which were made by the pets' vet, Martin Dinnes.

Bubbles the chimp was MJ's most famous pet, renowned for traveling the globe hand-in-hand with the pop star and often dressed like his twin. Purchased from a Texas research facility in the 1980s, Bubbles is living out his days as an alpha male at the Center for Great Apes (CFGA), a primate sanctuary in Florida.

Contrary to popular belief, Bubbles was not included in Jackson's will, though the singer did refer to his pet as his son on numerous occasions. Strangely, the animal that grew up around paparazzi has an aversion to cameras, according to the CFGA.

The chimpanzee was actually retired in 2005, four years before MJ's tragic end. Two other chimps, Max and A.J., stood in for Bubbles, unbeknownst to the public. One of these apes is in a Korean zoo while the other went to a Kansas breeding facility.

Rounding out the primates, Jackson's two orangutans were often photographed with their owner, but their whereabouts after his death remain unknown.

Brother big cats Thriller and Sabu were sent to Shambala Preserve, a California sanctuary outside Los Angeles. The rescue center is run by celebrity Tippi Hedren, who debuted in "The Birds." Hedren built an elaborate and extensive enclosure for the two, but Thriller succumbed to lung cancer in June 2012.

Hedren, former actress and model turned animal rights activist, lamented that the Jackson family never checked in on the tigers. Hedren is known for voicing her belief that wild animals should not be kept as pets.

Four giraffes roamed Neverland. Prior to MJ's passing, the long-necked herbivores relocated to Arizona in 2007 to Banjoko Wildlife Preserve, also called Voices of the Wild Foundation. The center was opened by two well-intentioned retired folk whose hearts may have been bigger than their animal welfare skills.

In 2009, just weeks apart, two of the giraffes died unexpectedly, sparking controversy with animal rights activists declaring an investigation, one that does not seem to have occurred. The remaining two mammals were transferred to a sanctuary in Utah.

Amazon parrot Rikki was given favoritism by his owner, a cohabitant in Jackson's mansion instead of squawking in the separated aviary. Rikki joined the giraffes at Banjoko Wildlife Preserve along with other birds and snakes.

Five-thousand-pound Asian elephant Gypsy was a gift to Jackson from actress Elizabeth Taylor. The elephant present was Taylor's way of showing appreciation to Jackson for allowing her wedding to take place at his Neverland ranch.

Surprisingly, the location of this gentle gray giant are not known.

Jackson posed with his bulldog Large for many photo shoots. Large and other canines Spanky, Black Girl, Shadow, and Sasha have gone MIA.

Like Jackson's pooches, llamas Louie and Lola and lovable ram Mr. Tibbs have disappeared from the public eye.

The majority of Jackson's scaly pets found refuge at the Garold Wayne Interactive Zoological Foundation in Oklahoma. Most famous of Jackson's reptiles was an 18-foot albino python named Madonna and a boa constrictor named Muscles.

While Madonna resides in Oklahoma, the whereabouts of Muscles remain unknown. Two alligators also made the trip to Oklahoma. Over a dozen Chilean flamingos owned by MJ were moved to Cape May County Zoo in New Jersey, where they spend their summers outside in the Flamingo Yard and their winters inside the World of Birds Aviary. Chilean flamingos are the smallest species of the pink-plumaged birds.

Michael Jackson made a lasting impression on pop culture, but he is also remembered in history for his quirks, which included a household of exotic pets.

He wasn't alone in his money-spending habits when it came to his furry, feathered and scaly family. Across the globe, owners pour savings into pampering their pets. But Jackson certainly was unique in the pets he homed.